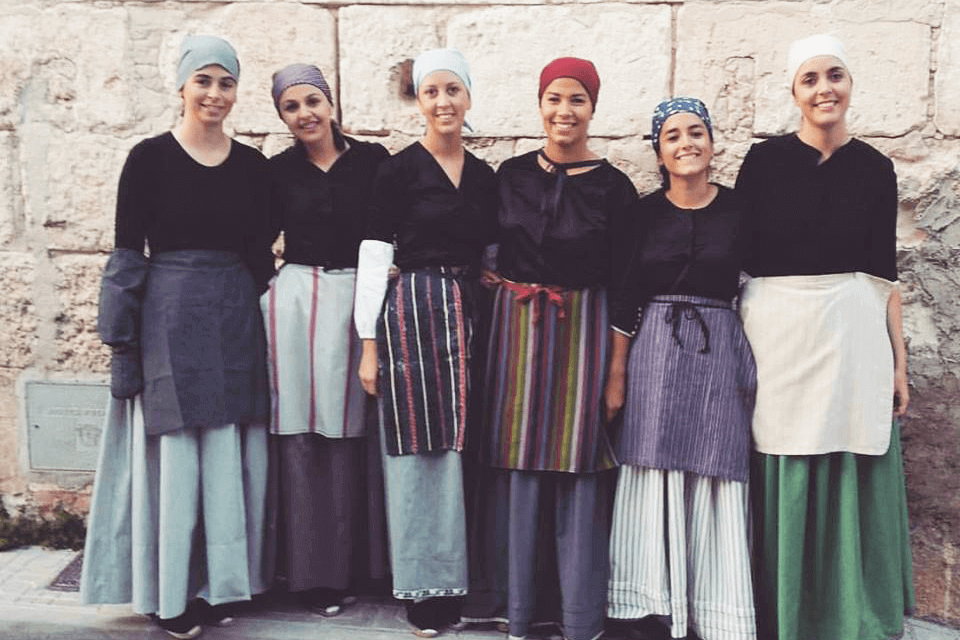 After consulting various Mallorquíns, of birth right, who have been adopted or who have lived in Mallorca all their lives, we have come up with 95 characteristics and shared experiences they all have.

Only a true Mallorquín can relate to more than 85 of the findings on this list. Take the test:

1. You have had hot chocolate or an ensaimada at Can Joan de s’Aigo
2. You have danced like a crazy person in the parties organised at Flexas bar in Palma
3. You don’t clean, you “fas dissabte” (only clean on Sundays)
4. You would have visited Valldemossa and eaten a “coca de patata” (a type of pastry) at Ca’n Molinas
5. You have seen the magical reflection of “El Ocho” at La Seu Cathedral of Mallorca. (Twice a year the glass windows reflect on the opposite wall to produce an eclipse effect)

6. If you visit the Castle of Bellver, it will be on Sunday, when entrance is free for residents.
7. If you have visited the Caves of Drach, it would have been on a school trip.
8. The best thing about turning 18 is being able to do whatever you want with your “quintos” (your group of friends who belong to the same generation).
9. You have taken the old train from Palma-Soller and then the tram from Soller centre to the port at least once.
10. You have gotten lost in the Tramuntana Mountain Range.
11. You have enjoyed sunsets in Formentor.
12. You have been at least once to the outdoor cinema in Parc de la Mar.

13. You have sat underneath an olive or fig tree in the summer.
14. You are probably named after your grandparents
15. It surprises you that mainland Spain does not offer sandwiches with tomato, olive oil and olives.
16. In addition to this, you have not had a Laccao (typical drink in Mallorca) outside of Mallorca.
17. Whenever you travel, you always carry with you a bag (at minimum) of Quelitas (crackers that are typical of Mallorca).
18. When you land at Sant Joan airport, you think  “Com Mallorca, no hi ha altre lloc” (there’s no place like Mallorca).
19. You celebrate your Saint Name more than your birthday.
20. They laugh at you in Galicia for pronouncing your x’s like -ch, for example, “Sanchencho” instead of Sanxenxo.
21. You never use the indicator whilst driving: no-one is interested in where you are going.
22. Any sort of distance is too far away.
23. You learnt these Mallorquín jokes at school: “esborres”, (rubbers) you use “estisores”, (scissors) and remove the end of  “pinturetas” colouring pencils with a “maquineta” (pencil sharpener).
24. Even if you do not speak Mallorquín, you definitely know what “emprenyado” (angry) means.
25.  It’s easier to flirt with Beyoncé than a Mallorquína at a party.
26. You go to Palma to see the “els llumets de Nadal”, the Christmas lights.

27. We’re sure you have in your contacts 8 Antonias, 10 Margalidas, 4 Catalinas (Cati Neus, Cati Aina, Catalina María, and Cati Inés), 11 Xiscos, 7 Tolos and an Onofre, María Magdalena or Melsión in your family.
28. You differentiate yourself from forasteros (the name given to Spaniards who live on the mainland) when you use venir (to come) instead of ir (to go) or traer (bring [changes with context]) instead of llevar (bring [changes with context]).
29. You never know if you travel ‘up’ or ‘down’ to Palma.
30. For a Mallorquín, un par (pair) is more than two.
31. For Easter, you like to cook “robiols“ and “panades” (Mallorquín pastries) as a family.
32. You have been to at least one of these parties: La Patrona (in Pollensa), Rock’n’Rostoll (in María de la Salut) and Sant Vicenç (in Muro).
33. Every proud Mallorquín keeps a pagés costume (traditional Mallorquín wear) in their wardrobe. You have also flaunted it in the procession of La Beata de Santa Margalida.
34. You use ‘pero’ (but) at the end of phrases
35. You know that “ja te diré coses” (means ‘I’ll let you know’ but only in Mallorca) means the complete opposite: that’s the end of the conversation.
36.  You know a song by Tomeu Penya.

37. When you are drinking you are not ‘drunk’, but “gat” (the word for drunk in Mallorquín).
38. You like “Torradas” (BBQs with meat), especially if someone offers you some of theirs.
39.  In Mallorca you have breakfast 3 times a day: in the morning, during mid-morning and in the afternoon. And breakfast isn’t breakfast without a generous dish of “variat” (a selection of tapas)
40. When you’re having a conversation, you confirm by saying “sí sí sí sí”, disagree by saying “no no no no” or simply by saying “caaaaaaaaaaaaaaaaaaaaaaaa”.
41. You call Mallorca “Sa Roqueta” (the Little Rock).
42. You’ve been to Can Calent in Sa Pobla to enjoy an “aigo neu” (ice slushie).
43. You have been to Lluc a Peu at least once in your life, or have at least tried to get there.
44. If you are not from Mallorca you will only ever be a forastero (someone from mainland Spain) or a guiri (someone not from Spain altogether).
45. “Pa amb oli” (typical Mallorquín dish) is your favourite meal.
46. You use phrases that don’t have any translation: “Ser un cap de fava”, “no faras mai ca teva”.
47. “Deixonar” is your go-to verb, its meaning depends on the context.
48.  As soon as one snowflake falls you bring all the family to Lluc.

49. You have taken part in La Ruta Martiana in Palma (a tapas bar-hop)
50. After an intense period of rain, you have visited the Ses Fonts Ufanes (where water spouts from the ¡ground)
51. You never miss having a calamari sandwich at Ca’n Mikel in Palma on Fridays
52. You think that a “llonguet” is not just a type of bread, but also a Palmesano (a characteristic of being from Palma)
53. If you are from the north, you eat at the buffet of Ses Torres, during the week when it’s cheaper, and if you are from Levante, you go to Can Pedro in Génova.
54. Spring starts with the Fira del Ram (traditional fair) in Palma.
55. You only watch the news on IB3.
56. You include almonds in all your desserts: banana with almonds, almond cake, almond ice-cream, almond ensainmada (a type of pastry)…
57. In summer, you eat buba flash (a type of children’s ice-cream) or bombón mallorquín (choc ices)
58. You always want to drink Mallorquín soft drinks like pinya or pep lemon.
59. Like a real Mallorquín, you take your first “capfico” (bathe) in the sea in July and your last in August, less than 25º is considered too cold
60. On the Día de las Vírgenes (Day of the Virgins) you eat doughnuts on the street.
61. If you have a dog it’ll either be a Ca Rater or a Pastor Mallorquín (typical dog breeds in Mallorca).
62. Why would I want caviar when I have sobrasada? (pork pâté).

63. You have joined in the correfocs (where people dress up as demons and shower everyone with fire sparklers) on the day of San Juan.
64. You’ve been to the beach in an off-road Méhari.
65. You have taken part in a matanza or you have at least been to one (when the family come together and slaughter a pig they have been raising for this traditional Mallorquín family celebration).
66. You firmly believe that if your ancestors were not part of the first settlers in Mallorca, you will never be fully considered a true Mallorquín.
67. You have visited Sa Dragonera or Cabrera.
68. You never want to leave the Sa Roqueta (Little Rock/Mallorca).
69. In summer, you have “badar a la fresca” (sat around doing nothing) with your grandparents at the front door whilst people-watching.
70. “Trempó” is not amiss in any meal.
71. You have taken part in a botellón (drinking openly outside) on the Paseo Marítimo (marina) of Palma.
72. Your preferred ice-cream shops are Can Miguel in Palma, Gelats Valls in Pollensa, Heladería San Remo in Ca’n Picafort and Helados Garrido in Alcudia
73. Do you remember Mimosín from Son Oliva?
74. After a storm, you always go looking for snails… and afterwards eat them with alioli (garlic herb dip)
75. You have enjoyed a performance by “El Casta” (a comedian) in Cala Gamba
76. If a Mallorquín says to you “no passis pena”, (don’t worry) you know to start worrying.
77. We have the best and you know it: Nadal, the best tennis player; Pedro Carbonell, the best fisherman; Marco Asensio, the best football player; Jorge Lorenzo, the best biker; Rudy Fernández, the best basketball player and Juan Campos, the best DJ.
78. You would like to see “Tomeu Vaig Fort” at CineCiutat.
79. You haven’t missed even one episode of Uep! Com Anam? and Toni Ballador is your idol
80. You have gone to “espolsar ametlles” (shake almond trees) to get a bit of extra pocket money.
81. Who hasn’t swum in a “safareig” (a small pool with water from the mountains or countryside)

82. You believe that the Soller tunnel was constructed by Casta (the abovementioned comedian).
83.  You like to have a langosta (famous sandwich) in Bar Bosch in Palma.
84. They say that we find it difficult to say problema (poblema)[problem], semana (sem.mana) [week] and caramelo (caramel.lo) [sweet]
85. You don’t get yourself a flat tire, “fas parxe” (when getting a flat tire, it is never the person’s fault who has caused it)
86. You consider Ramón Llull our Leonardo da Vinci of the Middle Ages.
87. The best bread in Spain is found in Fornet de la Soca in Palma.
88. You have been on an excursion to Sa Foradada.
89. If you don’t go partying on the Paseo Marítimo, you go to Fragel Rock or Túnel in Palma.
90. If you’re a university student, you have never missed a single Biofesta (a party to collect funds).
91. The national sport is “xafardejar” (gossiping).
92. You blame all your misfortunes on the humidity.
93. You have complained more than once about how much the Palace of Congress cost in Palma.
94. You say farewell by saying “dioso” and not adiós (goodbye).
95. You know less places than visitors to the island. A true Mallorquín knows Sa Roqueta (the Little Rock/ Mallorca) the least, as he/she does not feel the need to leave his/her village.

As you have seen, we eat more things in Mallorca than ensaimada. If you have anything else to share or we are missing something, don’t hesitate to leave a comment; everything is useful in order to enrich our popular culture.